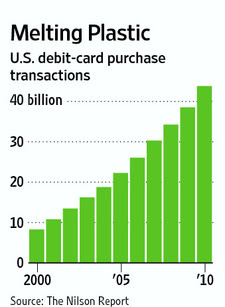 Normally, if a debit transaction is approved, payment is guaranteed, since debit cards don't bounce. But now banks are faced with new rules that will restrict how much they can charge merchants for debit transactions, erasing billions of dollars in revenue.
To make back some of that money, banks are weighing whether to divide debit-card services into components and charging for them separately-known as "unbundling." For example, if merchants want a guarantee of payment, as approved debit transactions currently offer, that would cost extra.
Unbundling would deal a blow to retailers who won a significant victory with the enactment of debit-transaction fee limits. Merchants pay debit transaction fees.
While details on how unbundling may be implemented are yet to be worked out, merchants would pay a fee for the guaranteed payment feature if it is enforced. It isn't clear if consumers will pay a penalty fee—similar to that on a returned check—for a debit transaction that bounces.
In December, the Federal Reserve proposed as part of an overhaul mandated by the Dodd-Frank law capping debt-transaction fees for large banks at 12 cents, down from an average of 44 cents. A Fed representative declined to comment.
The proposed limit on debit fees would drain $15.2 billion a year in revenue from the industry, said Robert Hammer, who runs R.K. Hammer, a credit-card consulting firm in Thousand Oaks, Calif.
Banks are leery of discussing specifics of their strategies and say they are considering many options.
"We've helped develop the debit-payment mechanism, and someone saying, 'We don't want to pay for that,' forces us to rethink things," Joe Price, Bank of America Corp.'s head of consumer and small business banking, said in a recent interview.
Bank of America, Wells Fargo & Co. and J.P. Morgan Chase & Co. are already beginning to revamp debit programs. Changes include axing debit rewards and adding new fees to checking accounts. Some banks also are considering increasing their issuance of prepaid cards, a form of plastic similar to debit cards but excluded from fee limits in the new federal rules. Other possible changes include curbing the number of debit-card transactions customers can make each month and restricting the size of a transaction with a debit card.
Shilpa Banerji, a 35-year-old consultant in Washington, D.C., said she switched to a credit union last year after Bank of America started charging a fee on her checking account. Ms. Banerji typically uses her debit card for purchases under $30, and the prospect of more disruption is jarring to her.
"I feel like I'm sandwiched between these two warring machines and I absolutely have no say in the matter," she said.
U.S. cardholders spent $1.39 trillion last year using debit cards branded with Visa Inc. or MasterCard Inc., up 15% from 2009, according to the Nilson Report, a Carpinteria, Calif., industry newsletter.Even last year, executives considered the tactic of charging for some traditionally bundled debit services. "I would say one of the most important changes that we will consider in our business model, in the new environment, is an unbundling of the services that we currently offer and price for," Byron Pollitt, Visa's finance chief, said in September. "I think this will lead to more a la carte pricing and more pay for the services based on the value that it creates for the merchant."
Representatives for many of the big U.S. debit-card issuers declined to discuss unbundling, with most saying they are waiting for the Fed's final rules, expected in April.
The battle over debit-fee limits focused on retailers' claims that debit cards, which draw upon existing funds in a customer's checking account, are little different from checks and cash and, therefore, should be priced as cheaply.
The payments industry has chafed at this contention, arguing, for instance, that, unlike checks, approved debit transactions don't bounce.
Unbundling "doesn't make a lot of sense," says Mallory Duncan, general counsel for National Retail Federation, an industry trade group. "It seems a bit strange to take out something that's intrinsic to a [debit] transaction. It's like trying to separate a bark from the dog and selling the bark separately."
The proposed fee restrictions have the payments industry seeking ways to make up for lost revenue. "If you see the Fed proposal the way it is, then unbundling is definitely an option," says Chris McWilton, president of U.S. markets at MasterCard.